Last summer, Isaac Gerg (pictured above), a research engineer at Penn State Applied Research Lab, and his girlfriend visited Italy to attend a conference and backpack through the country. A few days into the trip, Isaac began to experience mild flu-like symptoms, but wasn’t concerned as he had never had any chronic health issues. He soon felt better again and continued his trip.

A week after returning to the US, Isaac felt unusually weak and lethargic at the gym and then became so nauseated and dizzy that he had to lie down for fear of passing out. Again, his symptoms soon went away.

At a dinner a few days later, Isaac once again began to feel dizzy and nauseated. He laid down and suddenly felt the worst stomach cramps he had ever experienced. Isaac described the pain as “a thousand hands pushing out on the lining of my stomach.” His hands began to clench involuntarily and he felt tingling in his jaw and down his back and legs. He feared he was having a stroke and was rushed to the Emergency Room, where he remained until the cramps subsided.

Over the next months, Isaac was admitted to the ER multiple times for the same excruciating stomach cramping. Though his pain became increasingly severe, doctors didn't admit him to the hospital because his CT scan and ultrasound showed no abnormalities. It was not until his sixth visit to the ER, when doctors could not relieve his stomach pain, that Isaac was finally admitted to the hospital. Isaac remained in the hospital for five days, was put on antibiotics by one doctor, diagnosed with post infectious irritable bowel syndrome by another, and ultimately discharged by a third doctor with gluten intolerance -- a condition for which he had already tested negative.

Isaac remembers repeatedly mentioning that his father, grandmother, and great-grandmother each had issues with their gallbladders. The doctors in the ER pointed to his normal ultrasound as proof that his own gallbladder was healthy. After many ER visits and a 5 day hospital stay, Isaac decided he needed to help the doctors by gathering more information and signed up for PicnicHealth. 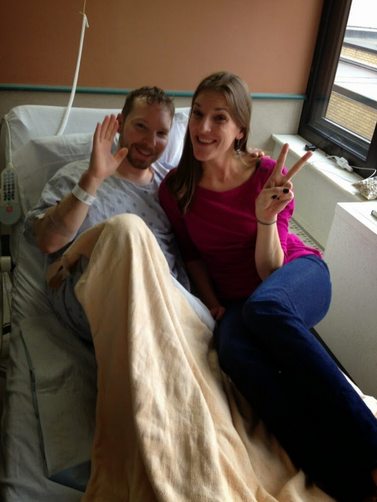 Isaac in the hospital with his girlfriend

Isaac decided to go to Johns Hopkins Hospital, the teaching hospital and biomedical research facility of Johns Hopkins School of Medicine located in Baltimore, Maryland. Because PicnicHealth had collected and organized a complete database of his medical records, Isaac went prepared with a baseline for his normal blood chemistry and immune system that he hoped would allow his doctors to both rule out certain diagnoses and gain insight into the time component of his medical history, which is often missed.

A few days after New Year’s, Isaac and his dad made the trip to Baltimore. Isaac printed out all his records and and charts and sent his PicnicHealth data to Johns Hopkins: his doctor was able to get a complete picture of Isaac’s health and soon realized that Isaac’s gallbladder wasn’t working. A HIDA scan confirmed the diagnosis. Isaac’s gallbladder was removed and almost all his symptoms went away. After four months of immense pain and several ER visits, Isaac finally had an answer.

Today, Isaac’s health is much better, though he still suffers from less severe cramping attacks. His doctor suspects Isaac may have POTS, a type of autonomic nervous system dysfunction, and together they are working to mitigate his symptoms through traditional treatments for patients with POTS.

Looking back, Isaac points to PicnicHealth as a key factor in providing his doctors at Johns Hopkins with a complete view of his health issues. “[My timeline] got everyone on the same page right away." (View a sample timeline here.) "When I was asked pathology questions, instead of digging through papers, I could easily pull the report up on my phone. What are normal values for my liver enzymes? Here’s a plot.”

"Health issues don't occur overnight, they are the result of everything added up over your lifetime." click to tweet

Isaac says he would recommend PicnicHealth not only to patients struggling with chronic conditions, but also to those in their early 20s. "Health issues don't occur overnight, they are the result of everything added up over your lifetime. I'd recommend subscribing to PicnicHealth even if you're in your early twenties and healthy or giving it as a gift to a recent grad. You never know how much a single medical record may help a diagnostician understand what's happening in your body.

Earlier this year, Elizabeth Brown, a non-profit communications specialist, decided to sign up for PicnicHealth, mostly out of curiosity. She has always enjoyed exploring new apps and digital services, especially those focused on

We asked PicnicHealth customers to tell us the 5 most frustrating issues they had (pre-PicnicHealth of course!) with modern healthcare. See the responses, turned into comics, below. 1) Being responsible for managing your